SPI stands for Serial Peripheral Interface and it is a synchronous serial communication interface used for short distance communication. SPI interface was developed by Motorola in the 1980’s to be primarily used in embedded systems and since then it has become a de facto standard. SPI interface is widely used in SD cards, RFID card reader modules and 2.4GHz wireless transmitter and receivers to communicate with microcontrollers.

SPI is a full duplex protocol which uses a master-slave architecture with a single master. The master is the controlling device which is usually a microcontroller, while the slave is usually a sensor, display or a memory chip which takes instructions from the master. The simplest configuration of SPI is a single master-single slave system, but one master can control more than one slave. One unique benefit of SPI is that the data can be transferred without any interruption and any number of bits can be sent or received in a continuous stream.

Three signals are shared by all devices on the SPI bus: SCLK, MOSI and MISO. SCLK is generated by the master and it is used for synchronization. MOSI and MISO are the data lines used for data transfer among master and slave. The direction of transfer can be both ways simultaneously, but an SPI device interested in only transmitting data can choose to ignore the receiving bytes and a device only interested in the incoming bytes can transmit dummy bytes. Each device has its own SS line. The master pulls low on a slave’s SS line to select that particular slave for communication. 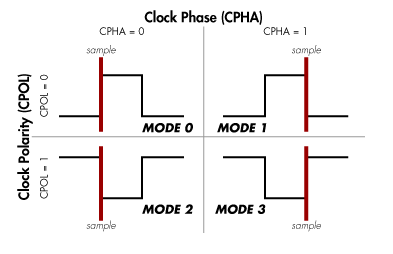 The master can choose which slave it wants to talk to by setting the slave’s SS/CS line to a low voltage level. In the idle, non-transmitting state, the slave select line is kept at a high voltage level. Multiple SS/CS pins may be available on the master which allows for multiple slaves to be wired in parallel. If only one SS/CS pin is present, multiple slaves can be wired to the master by daisy chain configuration. The SPI bus can operate with a single master device and with one or more slave devices. If a single slave device is used then the SS pin may be fixed to logic low.

The maximum SPI clock speed is dependent on the number of devices on the bus. There is no true maximum clock speed of SPI and it is solely dependent on the clock. SPI bus can run at high speeds transferring data at up to 60Mbps over short distances. SPI clock frequencies can reach upto 25MHz theoretically, but in practice, the maximum clock is limited to the frequency explicitly specified in the electrical specifications in the datasheet.