UART stands for Universal Asynchronous Receiver Transmitter. A UART’s main purpose is to transmit and receive serial data. UART was developed by Gordon Bell at Digital Equipment Corporation in the 1960’s. UARTs are used in automobiles, smart cards and SIMs in which they are commonly integrated in microcontroller chips.

In UART communication, the Transmitting UART converts parallel data to serial form, transmits it serially to the receiving UART, which then converts the serial data back into parallel data .Only two wires are needed to transmit data between the two UARTs. UART data bits are sent one by one, from the LSB to the MSB, framed by start and stop bits to precisely handle timing in the communication channel.

UART transmits bits asynchronously, which means that there is no clock signal to synchronize the output of bits from the transmitting UART to the sampling of bits by the receiving UART. Instead of a clock signal, the transmitting UART adds a start and stop bit to the data packet being transferred. Baud rate is a measure of the speed of data transfer, expressed in bits per second. Both UARTs must operate at the same baud rate. The standard baud rate is 9600bps which is sufficient for low speed operations and it can reach speeds of up to 115200bps.

To start the transfer of data, the transmitting UART pulls the transmission line from high to low for one clock cycle. When the receiving UART detects the high to low voltage transition, it begins reading the bits in the data frame at the frequency of the baud rate.

Parity is used for error checking in UART and it describes the evenness or oddness of a number. The parity bit is a way for the receiving UART to tell if any data has changed during transmission or not. Bits can be changed by mismatched baud rates, or long-distance data transfers. Figure 3. Odd and even parity UART

To signal the end of the data packet, the sending UART drives the data transmission line from a low voltage to a high voltage for at least two-bit durations.

UART is a simple protocol however the analysis continues to remain a challenge. Prodigy Technovations has multiple solutions for the  UART protocol analysis and Debug. 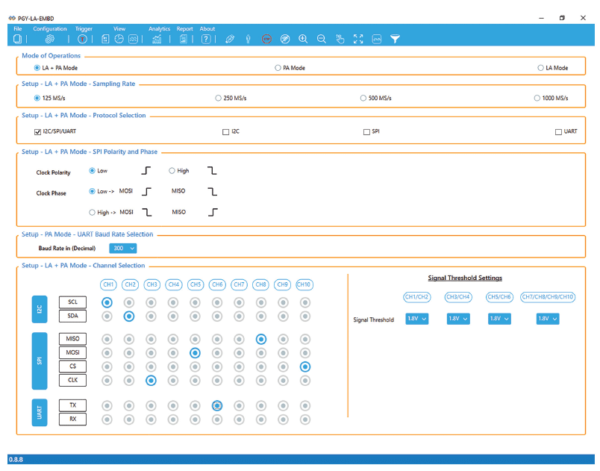