I2C Protocol stands for Inter Integrated-Circuit. I2C is a simple two wire design, half duplex serial communication protocol and the data is transmitted bit by bit over a single wire. I2C supports multiple masters and slave on the bus, but only one master can be active at a time. Any I2C device can be attached to the bus allowing any master device to exchange information with a slave device. A device can operate either as a transmitter or a receiver depending on its function. Initially, I2C only used 7-bit addressing but evolved to allow 10-bit addressing as well. Three bitrates are supported: 100 kb/s (standard mode), 400 kb/s (fast mode) and 3.4 Mb/s (high-speed mode).

I2C’s physical two-wire interface consists of bi-directional serial clock (SCL) and data (SDA) lines. Both SCL and SDA lines must be connected to Vcc through a pullup resistor. Data transfer is initiated only when the bus is idle. A bus is considered idle if both SDA and SCL lines are high after a stop condition.

One data bit is transferred during each clock pulse of the SCL. One byte consists of eight bits on the SDA line. A byte may either be a device address, register address, or data written to or read from a slave. Data is transferred the most significant bit (MSB) first. Any number of data bytes can be transferred from the master to slave between the START and STOP conditions. Data on the SDA line must remain stable during the high phase of the clock period, as changes in the data line when the SCL is high are interpreted as control commands (START or STOP).

The clock stretching pauses the transaction by holding the SCL line LOW. The data transaction cannot be completed until SCL line held HIGH. Clock stretching is optional and in fact, most target devices do not include an SCL driver, so they are unable to stretch the clock.

A device may be able to receive bytes of data quickly at the byte level, but it takes longer to store a received byte or prepare another byte for transmission. After receiving and acknowledging a byte, targets can keep the SCL line LOW to force the controller into a wait state until the target is ready for the next byte transfer, like a handshake operation.

A device, such as a microcontroller with or without limited I2C-bus hardware, can slow down the bus clock by lengthening each clock LOW period on the bit level. Any controller’s speed is adjusted to the device’s internal operating rate.

Prodigy offers an I2C Protocol analyzer to capture and decode the I2C packets. I2C protocol analyzer has the advanced capability not only to trigger but long allow very long captures which is very useful for the embedded design engineer during the debug. 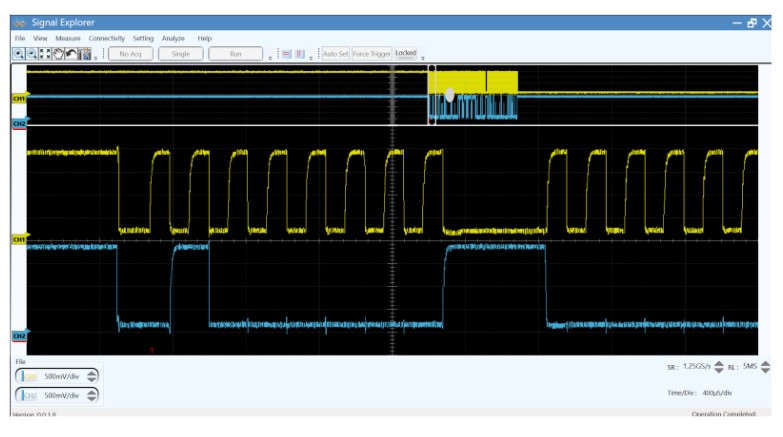 PGY_I2C_EX_PD supports I2C clock stretching in both master and slave devices in Open Drain Mode only. In the above figure, the line in yellow signifies the SCL clock and the line in blue is Data line (SDA). The SCL clock is running at 400KHz. On the 9th clock of every I2C data transfer, the I2C slave pushes the SCL line low (before the ACK stage). The length of a clock stretching period is not limited by the I2C protocol.  As the SCL line remains LOW for a certain amount of time, the SDA line is held HIGH. I2C clock stretching can be enabled using the script shown below in PGY_I2C_EX_PD.